Enrichment for Rats Part 2 - Natural behaviours: the bedrock of enrichment

This article is the second of a series of six, covering the topic of enrichment for rats. Having examined the five freedoms and the emotional framework of how animals feel in response to their environment, it’s time to move on to the specifics of enrichment.

The order of the freedoms varies between countries and among scientific research papers. To clarify, I am using the UK RSPCA model which is based on the five domains of life:

Freedoms 1, 2, 3 and 5 exist to remove the negative impacts of neglectful animal guardianship. To ensure that standards of care meet the physical and psychological needs of the individual, which vary very little between species. All animals need food, water, shelter, safety, comfort and wellness (both physical and mental).

But freedom four is different – it leads us to the “bringing in” of something extra - beyond the basic meeting of needs. It asks for the expression of natural behaviour, which can vary greatly between species. Indeed, this is the freedom that advocates for a rat being able to be a rat, a pig being able to be a pig and a snake being able to be a snake.

Natural behaviour appears to be fundamentally connected to the essence of a creature. The thing that defines a rat as being rat-like. So, let’s look more closely at a definition of what natural behaviour is.

What is natural behaviour?

Welfare could be described as the things that are important from the animal’s point of view. Rats, just like humans, spend a great deal of their time seeking out/creating the things that have significance to them, which would include food, water, companionship, a warm bed, safety, a mate and so on.

Natural behaviours could be seen as the route to the fulfillment of these felt needs. They are the (often) species-specific, (often) internally motivated behaviours that are shown in nature. However, it should be noted that there are natural behaviours (such as stretching, play and running) that are common to most species.

It is also important to realise that some natural behaviours could be linked to reduced welfare, examples would be unchecked freedom to reproduce, predator avoidance, flight responses and social aggression.

I favour the broader and complex definition proposed by Bracke and Hopster in their paper Assessing the importance of natural behaviour for animal welfare (2006):

Natural behavior is behavior that animals tend to perform under natural conditions, because it is pleasurable and promotes biological functioning.

This gives us a little more insight into the reason why the expression of behaviours is crucial to welfare. It’s not the result of the behaviour that is of greatest importance, it’s the execution of the behaviour itself. As an example, rats will forage for food – given the opportunity – even when food is also provided ad-lib in a bowl.

They will also take a more challenging route through their environment even when an easy (but perhaps longer) route is provided. The process of executing the behaviour is rewarding in and of itself – not just the end result.

Are natural behaviours instinctive or learned?

This is an interesting question as we would probably assume that all-natural behaviours are innate – as they appear across most members of the species. However, the rat has very few innate behaviours (complete behaviours that they are born with that do not have to be learned). Suckling is an innate behaviour, as is vocalisation in response to maternal movement, handling and isolation. Neophobia is thought to be innate, as is self-grooming behaviour.

Given the opportunity, most natural behaviours are learned as the juvenile rat’s physical ability increases. Just as a human infant learns to walk, a rat infant learns to walk, run, climb, balance, dig, socialise, build nests and so on. However, the drive to pursue these behaviours is instinctive and to a large degree ongoing throughout life – regardless of the opportunity to practice.

So, an adult rat who has so far only lived in a hamster cage without company, can be rescued and introduced to both group living and an open, active cage set up with good effect. Here the learning is often visible, with the rat becoming more “rat-like” day by day! Most rats have a strong internal drive to engage in natural behaviours – but they also need the opportunity to learn them. 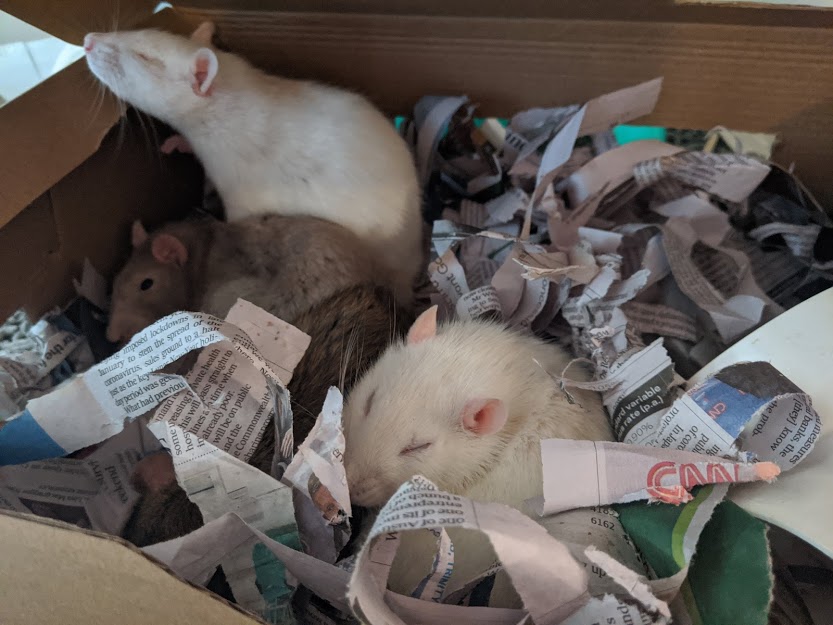 As well as internal drive, rats are often motivated by external (environmental) factors. An example of this is a rat who, when provided with the materials to do so, will build a nest when the environmental temperature falls significantly. They may do this never having built a nest before; however, it is still a learned behaviour and one which – in this instance – is initially likely to be learned by trial and error.

What is the negative impact of the lack of opportunity for natural behaviours?

There is no one behavioural outcome for a rat who is unable to express many of their natural behaviours, though it is agreed that the result of this scenario for all animals would be stress. What happens as a result of that stress depends a great deal on individual resilience and stress response.

What is clear is that not all behaviours carry the same importance to each individual and the more natural behaviours that are facilitated the greater the sense of well-being even where some behaviours are not permitted (for instance reproductive behaviours in pet rats).

Behaviours that seem to carry the highest weight of importance to most pet rats include:

This doesn’t mean that our provision should end once we have satisfied these needs for our rats, but they are probably a really good place to begin!

The impact of stress from lack of opportunity to express natural behaviours can manifest in many ways including:

Sadly, these stereotypical abnormal behaviours will often continue even when the animal is placed in a heavily enriched environment. Georgia Mason, in her paper Stereotypies: A critical review suggests that these behaviours can be considered as scars from past experiences.

The repertoire of natural behaviour in the rat

It would be extremely time-consuming to list in detail every natural behaviour that our rats will engage in given opportunity and practice, but here are some broad groupings with examples.

So, what are our behavioural goals for enrichment?

For our purposes, natural behaviours can be split into three categories:

Behaviours that happen despite us

We could be forgiven for thinking we can ignore these behaviours when it comes to enrichment but some – like gnawing – can benefit from being actively provided for. Gnawing is thought to be a stress reduction behaviour alongside its benefits in terms of manipulating the environment and dental health. Therefore, actively encouraging gnawing can be highly enriching for our rats.

Behaviours that lead to reduced welfare

These behaviours should always be on our radar, and as far as possible we should be aiming to manage our groups to remove these from our pet rats’ experience. Reproductive behaviours (beyond mock-mating) should never be part of a pet rat’s enrichment – unless they are also part of a thoughtful and purposeful breeding venture.

Behaviours that lead to increased welfare

These are the behaviours we can aim to provide for enrichment. These behaviours are many and we are unlikely to manage to support all of them in the long term, but regular exposure to some new experiences within a safe and unpressurised environment is a lifetime goal for our provision of enrichment.

If your rats are new to environmental enrichment don’t change everything at once. The tendency towards neophobia is still strong in some pet rats and it is easy for them to feel overwhelmed in the face of too much change, or novel experiences. Be patient and don’t take an initial lack of engagement as a rejection of an idea. I know one experienced rat guardian who offered a pea fishing activity many times before the day her rat group suddenly “got” it.

We’ll look at practical suggestions for enrichment in greater detail in part six of this series.

Article by Alison Campbell (© 2020),
If you'd like to read more of Alison's content, you can find her at Ratwise!

Assessing the importance of natural behaviour for animal welfare
Journal of Agricultural and Environmental Ethics (2006) 19:77–89
M. B. M. Bracke and H. Hopster (Pdf)

The importance of burrowing, climbing and standing upright for laboratory rats
Pdf published by the Royal Society of Open Science.
Joanna Makowska and Daniel M. Weary