“If two are better than one, then four is the definition of perfect.”
– A Squeak Proverb

We were never meant to get a fourth rat. Three was the perfect ‘permanent number’ for our mischief. Any addition to three was only ever meant to be for foster situations, when a rat needed some serious help socialising. We had fostered for Rachie’s Ratirement Home a few months prior and loved it. So naturally, we decided to do it again. 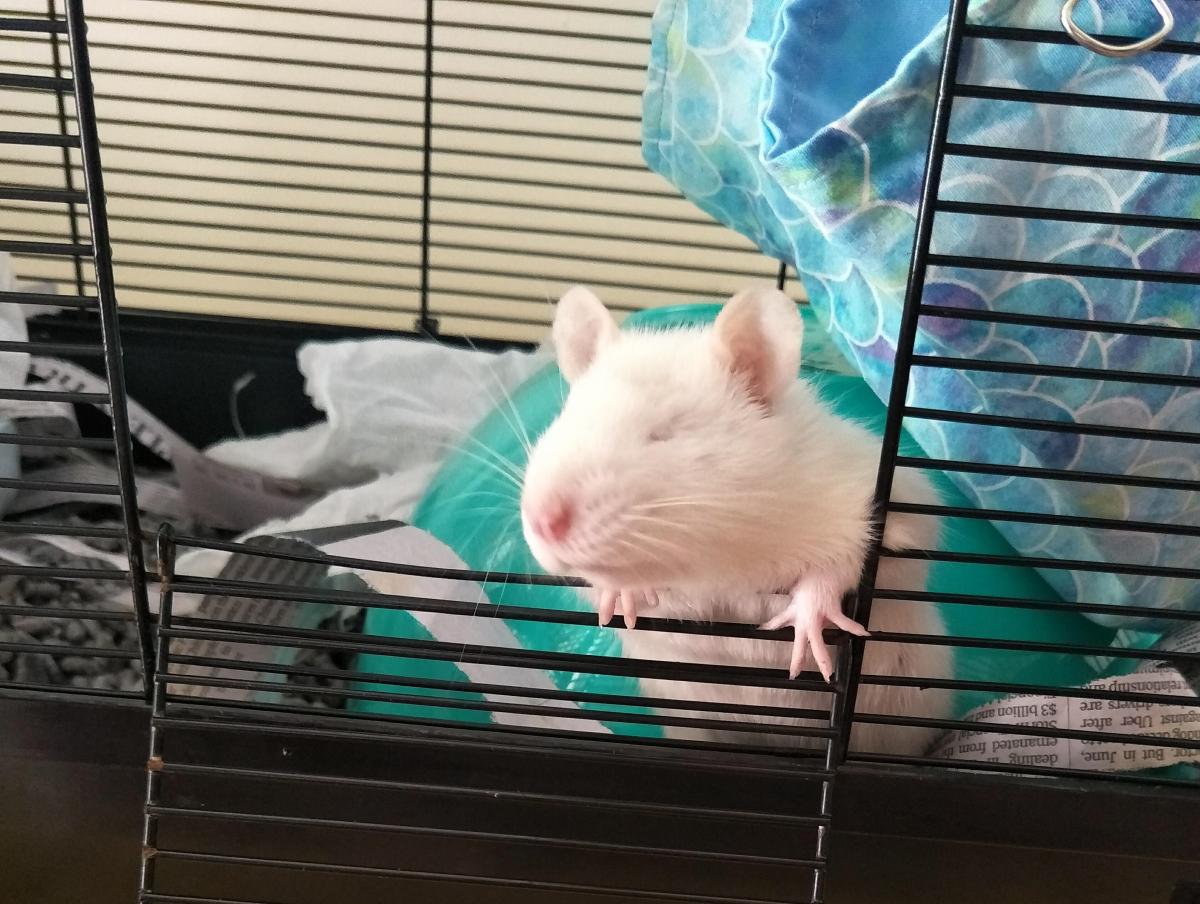 I asked Rachie if there was anyone suitable for social-based fostering. Squeak’s name­­ came up, and after hearing her story, I really felt for her. She’d come to the rescue and had developed an eye infection – one so serious that it left the rescue with only two options – euthanise or operate to have the infected eye removed. There was no other reason to have Squeak put to sleep, so they chose the operation, spending over $600 out of their own pockets. The community was quick to rally behind the rescue, and were able to cover the cost of Squeak’s vet bills, but there was still more to be done. While Squeak healed physically – mentally and emotionally she wasn’t doing so great, especially when it came to her cage mates.

I remember Rachie went specifically to the cage Squeak was in to interrupt a squabble. She handed Squeak to me, and to our surprise, she settled into my arms straight away. I think she was just grateful to have a break from her cage mates, a place of safety. But we agreed I’d take her home and see if I could get her comfortable socialising with other rats and humans.

When I got home, I put her in a separate cage and placed it next to our main cage to see what the general consensus was. Our girls were curious and excited about the newcomer. They’d be up one end of the cage, sprint down to the other end, back and forth, back and forth, trying to get a better look at Squeak.

Squeak too went from one end of her cage to the other – but slowly, cautiously. She puffed up her fur, shifted her body to the side and paced back and forth along the perimeter. It was clear from her body language that she wasn’t keen on our girls at all.

Squeak wasn’t fond of us either, despite our first positive interaction at the rescue. If she didn’t nip us out of fear when we reached for her, she would dive for the nearest hiding spot. If we managed to pick her up, she’d reward us with intense scratching (I have a nice little scar from one of these events), followed by flinging herself out of our hands and onto whatever surface she could reach.

But we were determined. We had a stable routine and calm home environment, and most importantly, we had three RRH graduates with gentle personalities. If anyone could foster Squeak, it was going to be us.

We monitored the two cages closely. Any positive interaction with Squeak was accompanied by a treat. I’d sit by her cage and just talk to her, and sometimes she’d scoot a little closer. We would move items between the two cages, getting Squeak used to new smells and getting her scent into the main cage.

Eventually Squeak started to drop her defences, and we decided to start proper introductions. Given her personality, we decided overwhelming her with friends was a better approach compared to our usual ‘one-at-a-time’ method. We popped her on top of the main cage, and watched as our girls approached her carefully. We were armed with treats and towels to dump in case of any fights, but I’m pleased to say our tailored approach worked. She got lots of snoot-to-snoot greetings, and eventually climbed into the cage. It wasn’t long before she settled into a hammock, and a few hours later she was joined by Vera. 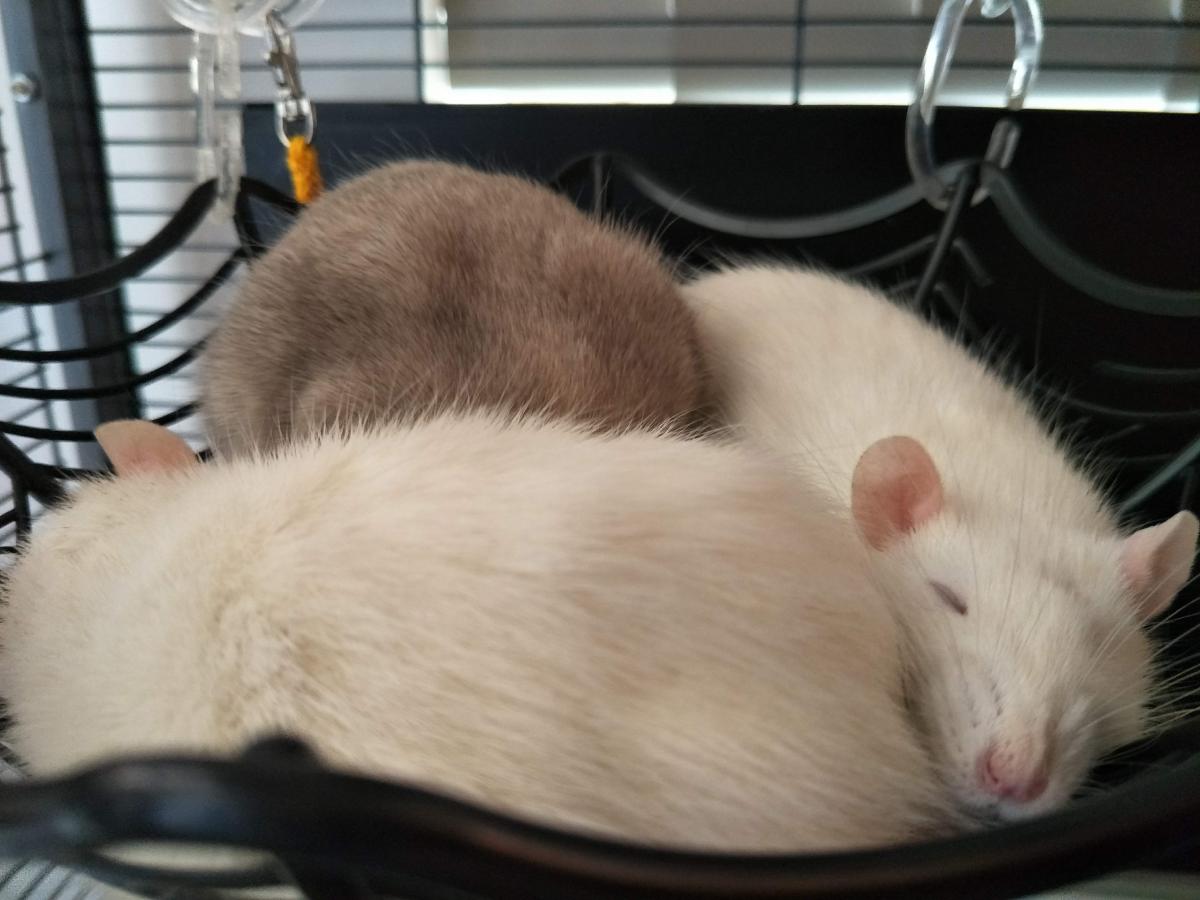 We packed up her small cage, satisfied she wasn’t a threat to our girls, or they to her. But like with any introductions, we kept a close eye on them over those first few days. A new pecking order had to be established, and there was plenty of pecking. Vera got a haircut, Aura learned not to sneak up on Squeak’s non-eyeball side, and Aria cemented her place as reigning alpha despite Squeak’s size and strength advantage.

Despite her unsuccessful challenge to the alpha position, Squeak was quick to cuddle up to Aria, and made an effort with Vera and Aura too. It soon became very clear that Squeak had found her mischief.

I started thinking about how she was going to go back at the rescue. While happy and content with our girls, I was worried how she’d fair in a new environment, and how other rats would react to her. What if she struggled to integrate? What if she was still fearful of humans? Were we the best home for her? 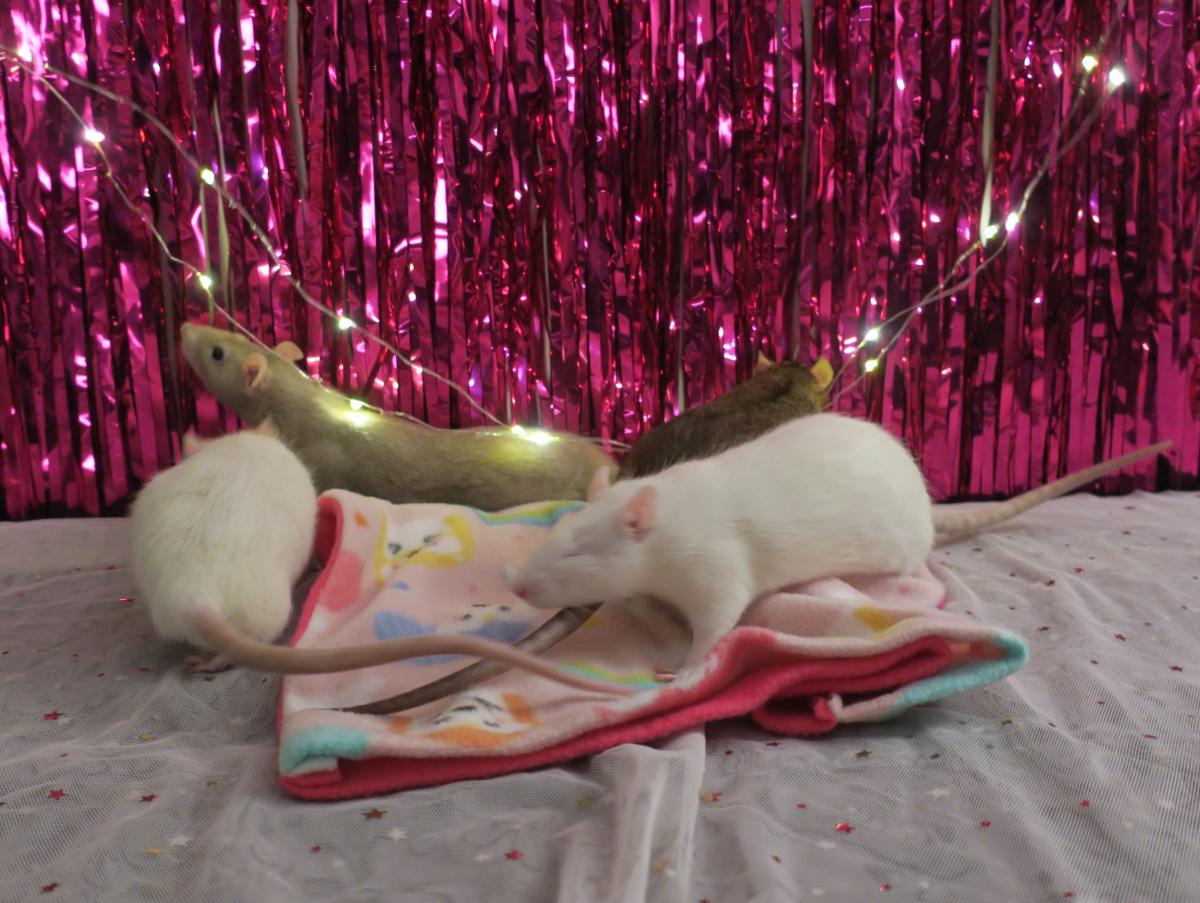 I asked Rachie that last question – I explained I was worried about Squeak going through more changes. She needed a long-term routine, ideally a permanent one that she was comfortable in. I wanted what was best for Squeak, and even if she didn’t want much to do with us, I was okay with that. I just wanted her to be happy and to feel safe, and our girls made her feel that way. So I signed her adoption form, and just like that, we had four rats.

Three months later, Squeak’s missing eye is one of the only identifying features that the rat in our mischief is still Squeak – that and her sassy attitude. She’s gone from fleeing at the sight of a person, to eagerly waiting at the top of the cage for someone to come by and give her a pat. She loves head scritches in hammocks, snoot-to-nose kisses, and every second of your attention. Still on her terms of course – we are still talking about Squeak here.

Fostering and/or adopting is not the easiest thing in the world, but as someone who’s adopted four times, fostered twice and foster-failed once, I can assure you it is one of the most rewarding experiences – both for you and the animal you’re helping. And if rodents are your pet of choice – whether you’ve got experience with rats and would like a challenge (like Squeak!), or are new to owning rats and need some beginner-friendly personalities (like Aria, Aura or Vera!) – reach out to the RRH crew to find your perfect mischief.

Story by #FosterAngelAmy who is the resident photographer and sponsorship coordinator at Rachie's Ratirement Home. 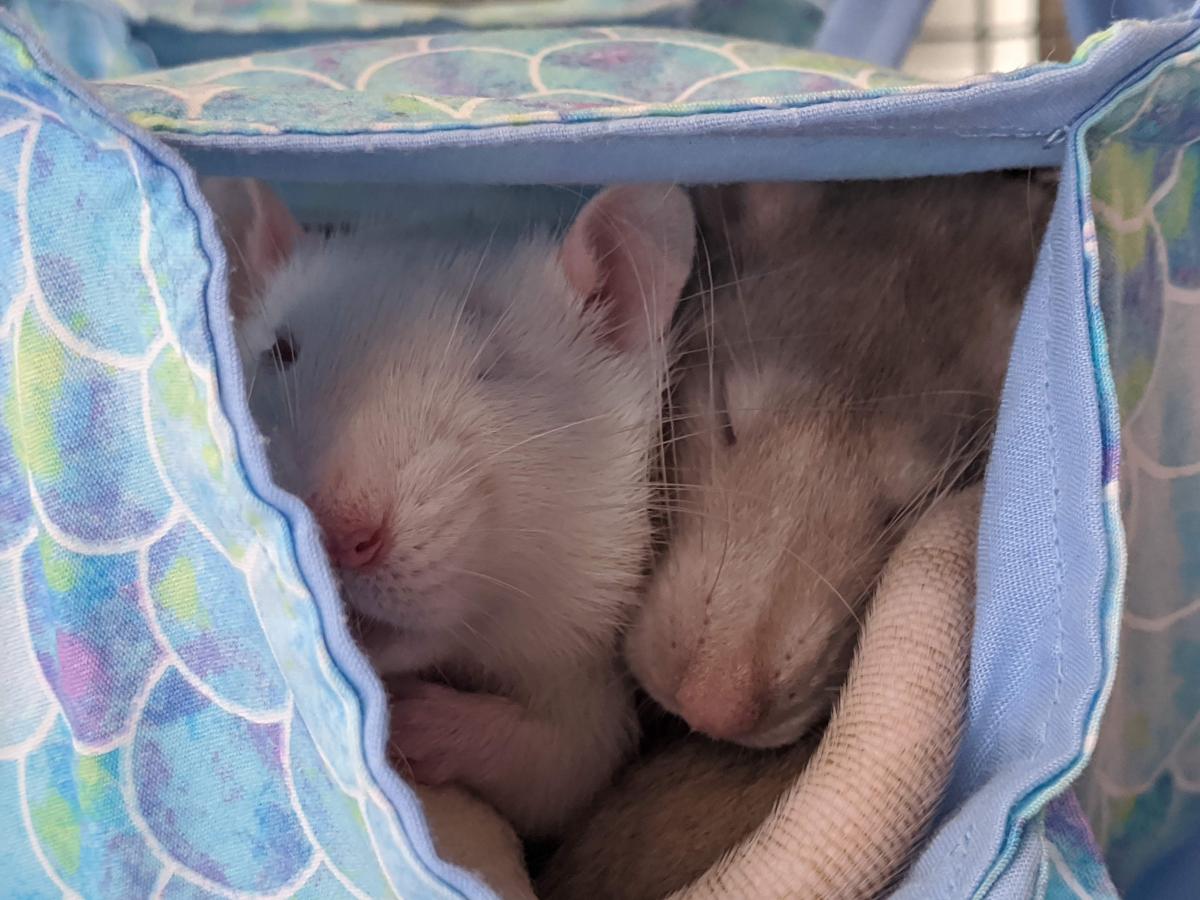 The Gatton Crickets - A story of community, rescue and love.

A wonderful tribe member contacted the rescue to alert us to some rats in need, these survivors appeared to be some lovely domesticated rats who ha

It's A Wrap - 2019 QRF Annual Results for Rachies Ratirement Home

It was a fantastic year for Rachie's Ratirement Home rodents (and humans!) at the Queensland Rodent Fanciers Shows. 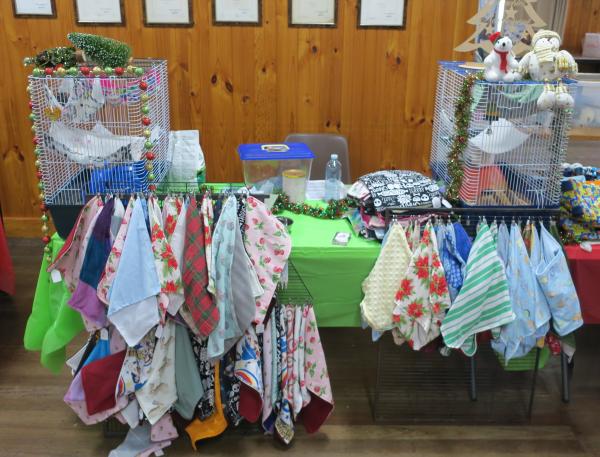