This is an old museum booklet I picked up from one of my favourite secondhand bookstores; Archives Fine Books.

Pencil notes in the cover show that it was sold for 40c long ago, and $7.50 more recently. I’m so glad Archives saw the value in it because it’s a fascinating little read specific to the local area!
It’s a field book designed to help give an overview of animals that may be spotted, so that the reader can find the correct volume to look up a proper identification key. It lists many local marsupials (two species of antechinus, the tuan, dunnart, planigale, quoll and two species of bandicoot) as well as birds, reptiles and larger mammals that are fascinating, but our interest lies specifically in the rodents, which take up one small but valuable page that serves as a little time capsule of the presence of local rodent species. 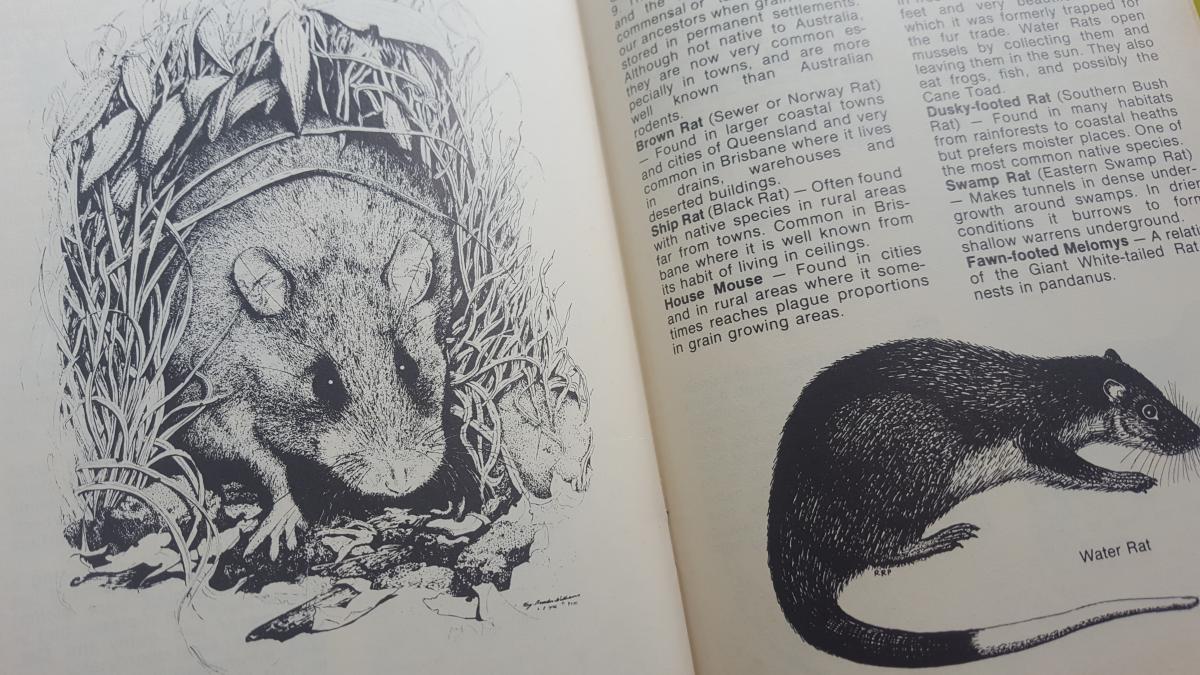 The rodents are broken into two categories, introduced and native. It describes the introduced  species as being common in towns, and more well known than the native rodents, a sad but truthful assessment. The Brown Rat (R. norvegicus) is described as being found especially in drains, warehouses and deserted buildings, whereas the Ship Rat (R. rattus) is described as commonly living in ceilings. This makes sense with what we know of R. norvegicus being larger, stockier rats than the small, lithe and agile R. rattus. The House Mouse (Mus musculus) is noted to be found in cities but also to reach plague proportions in grain growing areas.

The native species are most fascinating to me as they’re less commonly seen, and as the author notes, they are “most attractive animals”. There are over 50 species of native rats and mice according to the booklet, with at least five around Brisbane. It mentions “tree-rats, water-rats, stick-nest rats, rock rats and hopping mice”, but only details four species.
The Dusky-footed Rat (Southern Bush Rat), Swamp Rat (Eastern Swamp Rat) and Fawn-footed Melomys get a mention, with some notes about their preferred habitat. The Water Rat (now known by its indigenous name, Rakali, in an effort to destigmatize the animals by removing the association with invasive rats) was especially fascinating. Late in 2019, a study on rakali made it to the mainstream media which revealed that they had discovered how to eat cane toads safely by removing the heart. The booklet notes that rakali eat “frogs, fish, and possibly the cane toad.” - 40 years ago!

All in all, this booklet was a fascinating slice of local rodent history that I was so glad to find. The companion volume I found with it delves more specifically into rodent identification, I’ll post it up at a later date. In the meantime, anyone is welcome to come and read any of these books during visits to the rescue.

One sentence summary: Short field guide with some interesting tidbits of information.
Worth reading if: You’re studying the differences in rodent distribution over the last 40+ years.

Want to recommend a book or other piece of media for me to review? Have some cool old rodent-related paraphernalia you’d like to show us? Want to discuss content or just say hi?
Flick us an email, we’d love to hear from you!

This one was clearly written with passion and exceeded my low expectations, but is still pretty outdated and doesn’t read like a book wri

Hoo boy, strap yourselves in for a laugh and a cry because this book has not aged well.

This book is a pretty neat collection of rat representations in media and (mostly western) culture.