This one was clearly written with passion and exceeded my low expectations, but is still pretty outdated and doesn’t read like a book written by someone exceptionally familiar with rats.

A quick search of TFH publications finds a whole series of care guides written by either “Sue Fox” or “Susan Fox” depending on the year, encompassing hermit crabs, rabbits, gerbils, dwarf hamsters and more. The general impression after reading the book is that this was part of a greater collection of money spinning pet guides rather than a work of passion and expertise. This may seem like a harsh assessment, but some pictures labelled as rats are clearly mice, something anyone with enough knowledge to be writing a book on rats should be able to tell at a glance.

Fairly quickly the book gets into an overview of rats.
The tour of exotic rat species around the world was interesting enough, though several weren’t actually rats, before coming to Rattus rattus and Rattus norvegicus, the “most serious animal threat to man since they carry the disease organisms of bubonic plague, typhus and food poisoning”. If you’ve read our piece on Hans Zissner’s “Rats, lice and history” you already know that most typhus was transferred between humans by body lice, and the biologist in me wants to ask her to name one “food poisoning disease organism” that is transferred by rats more than human practice. 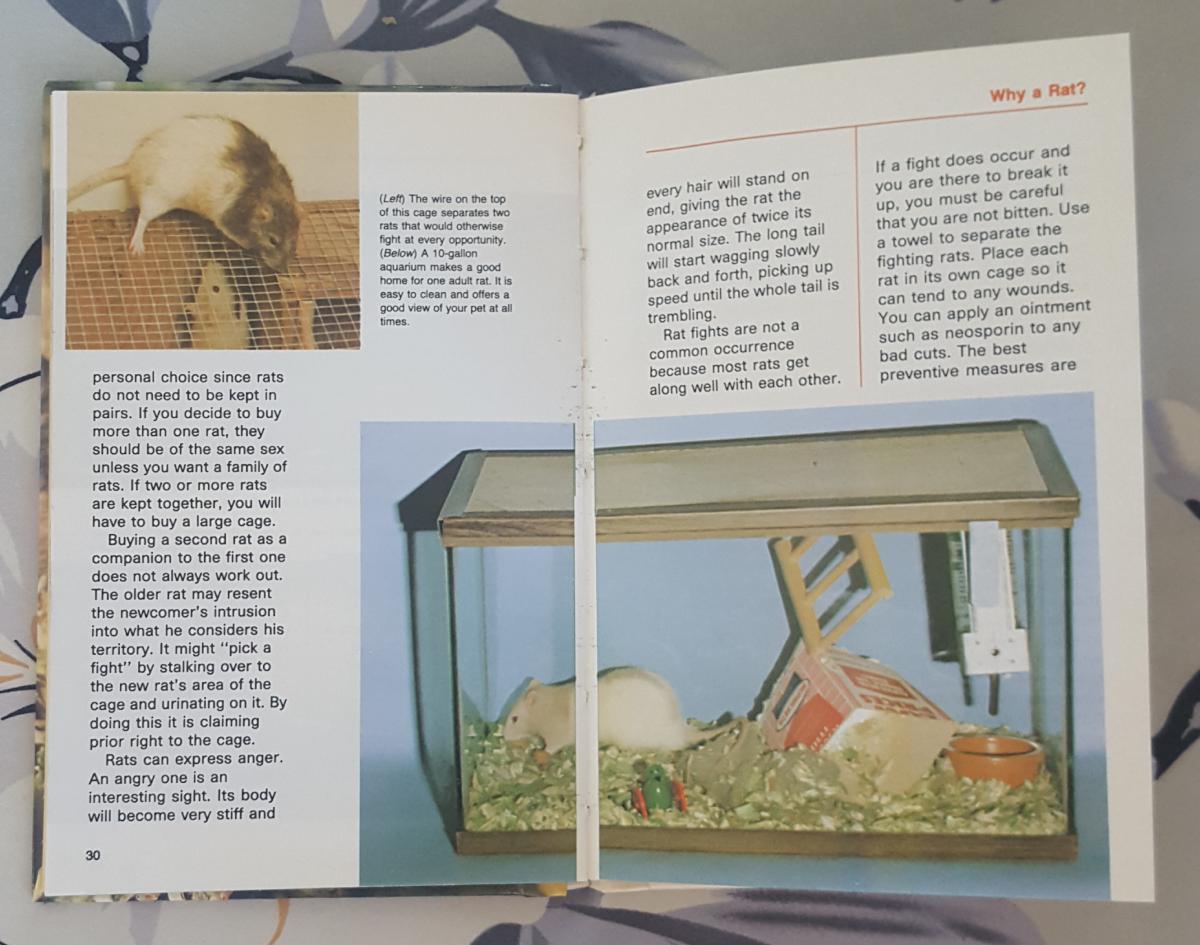 Off to a smashing start, Susan immediately follows up with some more incorrect facts, such as:

Care and welfare standards are subjective and shift over time, but I’m fairly comfortable roasting statements like this because no matter how you cut it, it’s just bad research.

What is more forgivable is advice on care. While this is the most damaging type of misinformation, it reflects information that has slowly grown over time. During the late 80’s when this book was written, things were just done differently. Definitely worse, but differently.

Fox recommends buying a rat from 4-8 weeks which is flat out not right, a 4 week old rat is barely weaned and still learning social skills. Breeding is encouraged, and “The decision to buy one rat or two is a matter of personal choice since rats do not need to be kept in pairs.” We now know that even a few months of isolation causes stress responses in rats so strongly that it changes the shape and structure of their brain and adrenal glands, and lone rats are now considered inhumane. Fox recommends that “A single rat is perhaps the luckiest [and will] be more devoted to you since you are the only one with whom it can play.” Yikes!

Food advice isn’t ideal but at least by now we’re starting to see recognition that rats need more protein than a seed mix provides, and she acknowledges that rats can safely eat pretty much anything we do, as a treat. Interestingly, she puts the average lifespan at about 2 and a half years but their max lifespan at over 5, which is tempting to take as validation of the idea that rats used to live longer before intense aesthetic selection, but without something more concrete, has to be dismissed as yet another poorly researched fact. There’s a whole chapter on breeding which I won’t even start on, but suffice to say encouraging any new rat owner to breed for fun and profit just sucks no matter what the species.

But there is also some good advice in there! Holding your rat close to your body with two hands to help them feel safe, talking about how they are loyal, affectionate and like to keep clean. Discussing the idea of covering different macro and micro nutrients in the diet (though not in those terms), and explaining how to hand rear or surrogate orphaned babies are certainly not topics I expected to see, let alone having done what I could consider a pretty good job for an 80’s care guide.

So overall, can we learn anything from this book? Look, it’s not the worst I’ve read, it just doesn’t match up with the current knowledge, and it’s not a huge labour of love in terms of research or old enough to be very interesting in itself. There’s power in being able to see just how much care and welfare has changed in the last few decades, and seeing that it’s a constant knowledge journey to this day. As an example of old care advice, it’s somewhat interesting.

One sentence summary: Old care guide from the 80’s that isn’t relevant any more because a lot of the info is outdated and the research isn’t a very high standard.
Worth a read if: Honestly there’s not much here for the modern rat owner, it’s too hard to pick the good from the bad and there’s nothing especially unique to glean.

Want to recommend a book or other piece of media for me to review? Have some cool old rodent-related paraphernalia you’d like to show us? Want to discuss content or just say hi?

Flick us an email, we’d love to hear from you!

Hoo boy, strap yourselves in for a laugh and a cry because this book has not aged well.

This book is a pretty neat collection of rat representations in media and (mostly western) culture.

This is an old museum booklet I picked up from one of my favourite secondhand bookstores;